On Ferguson, Part II (or: The Peter Principle in Action)

Posted on August 15, 2014 by ConstitutionalJest

As I type, the Ferguson Police Department has apparently released the name of the officer who shot Michael Brown.

It’s not the name that Anonymous published and then doxed.

That name was not even someone in the Ferguson or Saint Louis County PD. Basically, the Anonymous twitter feed posted a random innocent person’s name and exposed them to lunatic vigilantes from the fringes of society. I thought you were interested in “Justice,” Anonymous. Apparently not.

Not to be outdone in stupidity, the Ferguson PD released footage of Michael Brown strong arm robbing a grocery store of some cigars before the shooting. 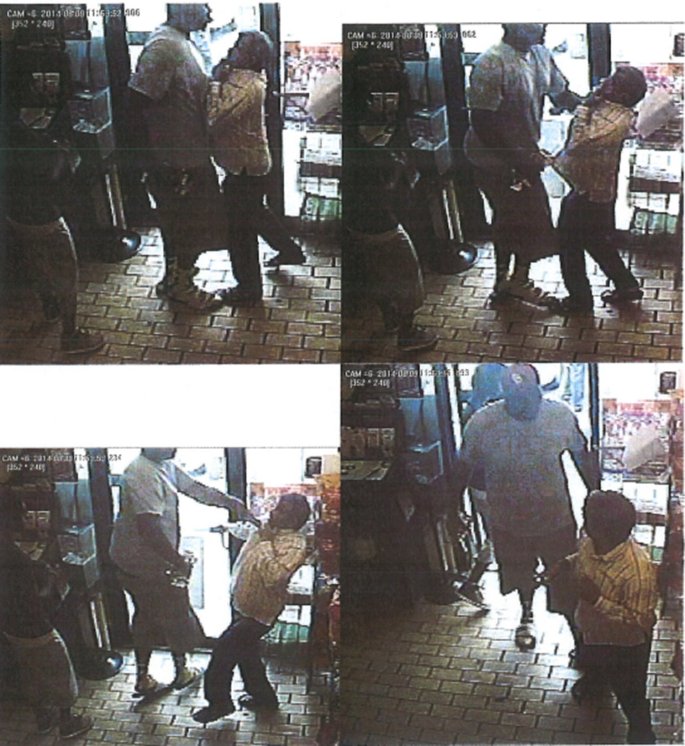 And here’s Brown after he was shot (WARNING: MAY BE UNSUITABLE):

Take a close look at the socks and sandals again. Yes, it’s the same guy.

Here’s the thing, though. It doesn’t matter that it’s the same guy. Strong-arming a store clerk does not create a license for a police officer to shoot an unarmed man. And that’s aside from the fact that the officer had no idea that Brown was a suspect.

The officer stopped an unarmed black man for jaywalking, and then shot him multiple times.

Yet, for some reason, Thomas Jackson, the Ferguson Chief of Police, thinks this information is relevant. It’s not. It doesn’t explain why an officer in his charge shot an unarmed man multiple times, including when the man was running away and when the man was surrendering with his hands up. Jackson has looked completely overmatched in his handling of a public relations disaster that was in a large part his own creation.

Look, Thomas Jackson has a difficult job. I’ve been responsible for 20 staff before, and it’s insanely difficult to get that many people to act professionally. You cannot control another’s actions completely, even if they are in your employ. I don’t blame Jackson for a mistake (assuming it was a mistake, however horrible) that an officer made.  I do, however, blame Jackson for closing ranks in order to protect one of his own.

I do blame Jackson for the racial makeup of the Ferguson Police Department, which he has headed for the last four years. He inherited a corrupt department, and should have cleaned house. And yet, only 3 of the 53 officers in Thomas’s charge are black in a town that is 69% black.

I blame Jackson for releasing the information about Brown, as if the information were in any way a mitigating circumstance that explained why an unarmed man was shot by his officer multiple times.

I also blame Jackson for the military tactics on the first night of dealing with protesters that only escalated the situation and created more tension, even if there was looting.

And to underscore exactly how poorly the leadership in the Ferguson Police Department and Saint Louis County Police Department handled the protests, we can look at how the Missouri State Troopers, under the leadership of Captain Ron Johnson, handled things with all the professionalism and decency that we expect, deserve, and admire in an upstanding officer of the law.

Jackson should be fired.

Posted on August 14, 2014 by ConstitutionalJest

Try to learn to let what is unfair teach you.
— David Foster Wallace, Infinite Jest

On Saturday, Michael Brown and a friend were walking down the street. An officer pulled up, and demanded that they get on the sidewalk. The officer then stopped, and there was an altercation. Brown was shot once, and started to run away. Brown was shot again, in the back, from 30 feet. Brown fell down, but put both hands up, and stated he was unarmed. The officer then shot Brown several more times.

Even before the shooting, Missouri’s Attorney General filed an annual report stating that Ferguson Police were twice as likely to arrest an African-American during a traffic stop than they were a white person. There’s certainly a racial component. As it turns out, America isn’t for black people.

This was hardly the only questionable circumstance where an unarmed black man was killed by police. Unfortunately, this is also the rest of America. It’s not all that different in smaller cities, where there have been similar issues.

The response has been horrific. Police are shown standing in full riot gear, hurling tear gas and firing rubber bullets at protestors. It has instigated further violence. And it is wrong. Our police forces have been militarized.  Check that. The military has discipline and order. The police force in charge here (Saint Louis County police, for the moment) has no such thing.

Police are now armed with more Kevlar and equipment than soldiers took to war in Iraq. Except they are not nearly as well trained.  The result is predictable, if depressing.

It’s one problem after another, police officers who have sworn to protect and serve staring down protesters exercising their rights. They make bad decisions. 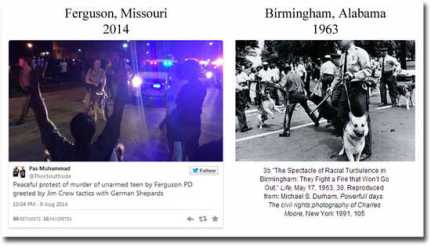 Tell me again how this isn’t about race. Courtesy of DailyKos.

So what’s our recourse as citizens? How do we ensure that the police follow their procedure? How do we keep an armed group in line without inciting violence?

The answer SHOULD BE simple, but it seems that it is not.

It’s important to note that you CAN record police in public places in the United States.  Previous eavesdropping laws (such as those in Illinois) have been found unconstitutional in federal courts. We live in the age of the iPhone, where Vine and YouTube and Twitter are ubiquitous. Anyone can be recorded in public, including police.

But the police are against that. There is video up of a news crew being gassed and having their equipment dismantled. An Al-Jazeera America crew, ironically enough, suffered a similar violation of their freedom of the press in this country to the one they would in many authoritarian regimes around the world.

Two reporters were arrested inside a McDonald’s. Their crime? Apparently trespassing. An Alderman was also arrested. Police are dispersing crowds, denying them their right to peaceably assemble that is guaranteed by the Constitution.

And when that is reported, they attack the press.

This is the no fly zone ordered by the FAA upon request by the Saint Louis County Police Department. When asked for the basis of the order, the FAA official told the reporter they could “FOIA it.”

The police in Ferguson seem to think that creating an informational black hole will cause the protests to die down. I hope it doesn’t. This cannot be the way that our local governments act in the future. There is a dead child, and yet the worst part about it all may be the violation of rights that has been perpetrated by the police in the aftermath. They need to be told that this stomping on our rights is unacceptable.

The protesters are helping to make that happen. They are angry about a dead black child, and have every right to be. But just by protesting, they are doing their part to keep you and I free. Keep fighting the good fight.